Welcome to the gateway of a glorious tradition – THE PREMIKA SAMPRADAYA 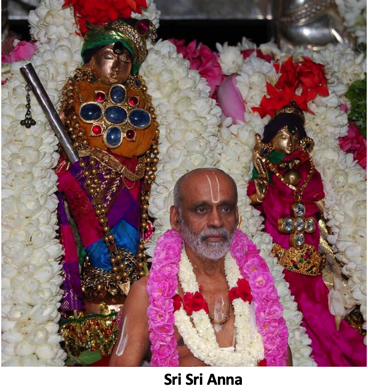 (I offer my Pranams at the Lotus feet of my Sadguru Sri Krishna Premi Maharaj who incarnated in this world to show the path of NamaSankeerthan as the only way to attain Hari in the age of Kali.)

Half a century of strife based on religion, caste and creed… the SanatanaDharma‘s roots shaken and interrogated; the Hindu values and principles of life under severe criticism-these were the dismal conditions during which the Divine Incarnation of our beloved Sri Sri Anna (Sri Sri Krishna Premi Swamigal) occurred.

On the banks of the river Kaveri in Tamilnadu stands a quaint village Senganur-Sri Anna was born to pious parents, Sri Venkatarama Shastrigal and Smt. Parvathi Ammal and was named Ramakrishnan. 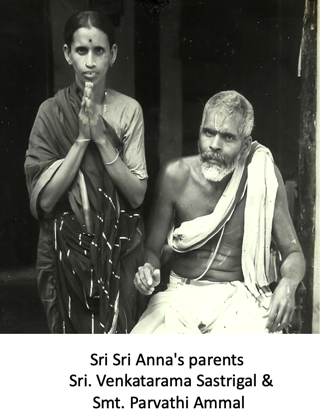 He was born on the Krishnashtami day in 1934 in the Rohini Star. His family were the descendents of the renowned Vaishnavite Acharya Sri Periya Vachan Pillai. He charmed his family and the people of the village alike with his Bala leelas and came to be fondly known as “Ambi”.

The young Ambi was joyfully engaged in composing soulful Bhajans and verses on Sri Krishna right from an early age of 8. Next came a period of rigorous Yogic practices and Dhyana. Sri Anna had become a master yogi by the age of 12. With the blessings of his Gurus, Sri Siva Prakasha Anandagiri Swamigal and Sri Bhagawan Nama Bodendral began a different era in His spiritual life. He took to the Srimad Bhagavatham as his pramana grantha [Authoritative treatise].

With the advent of Sri Baktha Kolahalan (the supreme and presiding deity at Paranur) Sri Anna’s Upasana Murthi, Sri Anna’s spiritual path took a different turn from that of a yogi to a Krishna Premi. Yes! A path that captivates, enchants,exhilarates and easy for all to follow. A new horizon of Prema Bhakthi and Hari Nama pracharam emerged. He founded a glorious sampradaya aptly named PremikaSampradaya.[SriAnna is also addressed as Premikan].

Sri Anna himself performs the Ashta-Yaama sevas to Sri Kolahalan right from Suprabhatham in the morning, the afternoon pooja, the evening rituals till Dolothsavam at night. Like Sri Thiyagaraja Swamigal who sang Utsava sampradaya keerthanas for his Rama, Sri Anna has composed Uthsava krithis for Sri Kolahalan’s seva. These kirthanas are sung everyday for the Lord. Quite a few avathara purushas also descended along with Anna around the same time. The key among them are Sri Vasudeva Brahmam, Sri Ranganatha Iyer (Ramayana mama), Sri TC Srinivaan , Sri Krishnamurthy, Sri Nagarajan, Sri Balarama Sastrigal, Sri Nagaraja Srowthigal and Sri Venkatesan to name a few.
Though Sri Anna was always in tapas , he married Smt. Madhurambal (Sri Manni) in obedience to Sri Vasudeva Brahmam’s words. Ever since, the Divine couple is involved in Sri Kolahalan’s Kainkaryaram till date. What ever it takes, Sri Anna makes it a point to be in Paranur every Ekadasi. He follows `the Ekadasi vratham strictly – fasting, performing Abhishekam to Kolahalan, Pravachanam in the evening and Divyanama Sankeerthanam at night.

The previous yugas demanded strenuous spiritual exercises to be performed by a seeker to attain Mukthi or liberation from this vicious circle of birth and death. The nature of Kaliyuga does not allow any spiritual practice in its truest form. The Shastras & Srimad Bhagavatham speaks of The Bhagavatha Dharma as the only alternative, to redeem mankind from this sad plight. Sri Anna’s Avatara is solely to rejuvenate Bhagavatha Dharmam. A lay man’s definition of Bhagavatha Dharmam is chanting Hari Namasankeerthanam. 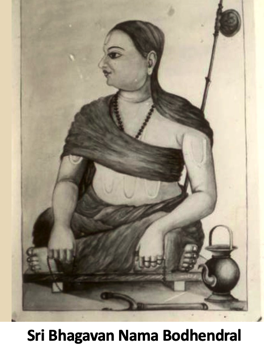 With His Guru Sri Bhagavan Nama Bodendral’s Rama Nama Siddhantha, Sri Anna pioneered the spread of Hari Nama throughout the country. He has toured the length and breadth of India from Kanyakumari to the Himalayas multiple times to render discourses on Srimad Bhagavatham, Srimad Ramayanam, Mahabharatham, Bhakthavijayam, Bhagavath Geetha, Azhwargal vaibhavam, Upanishads etc.

He is an ocean of knowledge – a reservoir of wisdom. There is in fact no topic that is not dealt by Him. He also founded and established the “Akhila Bharatha Sadhu Sangham” in several cities across India.The objective of the establishment of the ’Akila Bharata Sadhu Sangam’ across the world, is to conduct Satsangs which includes Naama Pracharam, Discourses, Bhajans , Akanda Naamams , Radha/Sita Kalyanam and renovation of Divya Desa temples.

Sri Anna, in all His discourses highlights that Hari Nama sankeertanam is the only, but sure way to get across this turmoil of earthly life. The efficacy of the Naama, effortlessness involved in its chanting, its all-encompassing nature and its triumph over other spiritual practices are reiterated by Sri Anna time and again.

The mammoth task of restoring Santana Dharma was spear-headed by Sri Anna and is carried forward diligently by his Sishyas and his children. Sri Anna performed Acharya Pattabishekam for Sri Hariji in 2009 .

Sri Anna has also composed numerous Granthas(texts)in many languages in various genres that has the wisdom of the Vedas, the Upanishads , the Puranas and the Divya prabandams encapsulated in them. This makes Sri Anna no less than Saint Veda Vyasa himself. The prolific output of all kritis dedicated to Sri Bhaktha Kolahalan expounds the abundant love and desire of an earnest Bhaktha to be in unison with the Lord. The gamut of these verses makes one wonder if Sri Anna is Sri Thyagaraja or Purandaradasa or Bhaktha Meera. Refer Sri Anna’s Works for more. 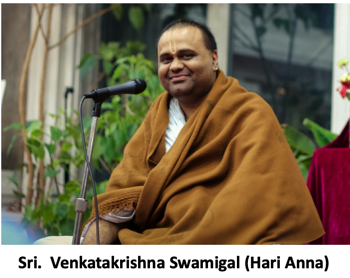 To describe Sri Anna with mere words is a futile exercise; neither will one be able to quantify his contribution to mankind.

Like how Brahman can’t be explained in words, so is THE GREAT PHENOMENON – Sri Sri Anna. HE is to be EXPERIENCED